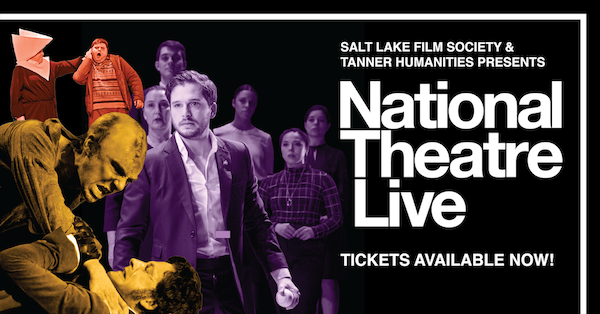 Individual tickets to screenings can be purchased through the Salt Lake Film Society.

The Book of Dust

Much Ado About Nothing

*All screenings take place at 12pm except as noted at the Broadway Centre Cinemas, 111. E Broadway

The Tanner Humanities Center and Salt Lake Film Society are excited to welcome you back to the Broadway Center Cinemas to relaunch our beloved National Theatre Live program.  We will kick off the season in August 2022 with a screening of the Royal National Theatre in London’s production of Shakespeare’s Henry V, and we will offer nine additional screenings of classic and contemporary plays throughout the year. We also will arrange educational enhancements, including introductions or panels by U faculty, free screenings for high school students, and reduced fee tickets for teachers, students, and veterans.

As part of our relaunch, we are offering two season ticket packages:

Bringing the best of London to the Salt Lake City screen

National Theatre Live launched in June 2009 with a broadcast of the National Theatre production of Phèdre with Helen Mirren. Broadcasts have now been experienced by over 5.5 million people in over 2,000 venues around the world. Past broadcasts from the National Theatre have included The Audience starring Helen Mirren; Danny Boyle’s Frankenstein with Benedict Cumberbatch and Jonny Lee Miller; Man and Superman with Ralph Fiennes; Yerma starring Billie Piper, Macbeth starring Kenneth Branagh, and Follies starring Imelda Staunton.

Venues view the broadcasts ‘as live’ according to their time zone or at a later date - which is where we come in. The Tanner Humanities Center started broadcasting National Theatre Live productions in 2010 at the University of Utah's historic Post Theatre. Shortly thereafter, screenings moved to Tower Theatre before finally landing at Salt Lake Film Society's Broadway Centre Cinemas in downtown Salt Lake. Proceeds from screenings support the Tanner Humanities Center's K-12 theatre/education outreach program, helping more that 500 students throughout Utah experience the best of British Theatre as learning supplements to their arts, English, and theatre curriculae. Partner schools include, Salt Lake Arts Academy, Herriman High School, West High School, and Whittier Elementary.

K-12 Educators: if you are interested in hosting a free, private screening at the Broadway for your students, please contact us!

Thank you to the season ticket supporters of this program!