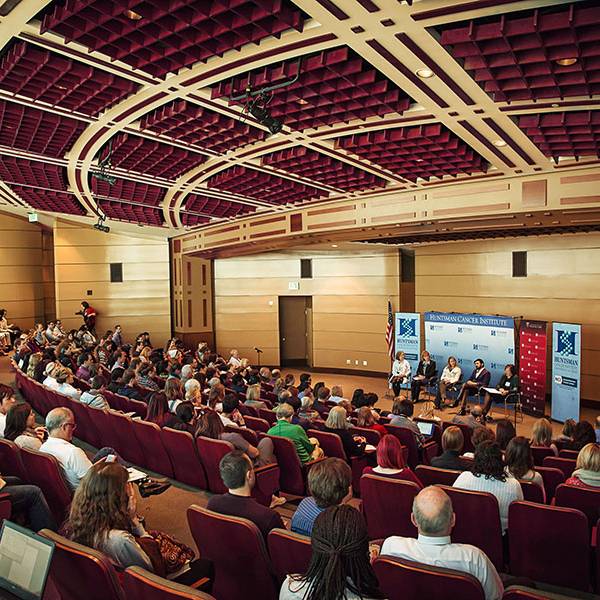 Work in Progress Talks give research fellows at the Tanner Humanities Center opportunity to present the latest work on their current research and to receive feedback in a casual setting from faculty, staff, students, and community. Open to the public but seating is limited, light lunch provided.

Due to University policy regarding COVID-19, the following WIPs were cancelled:

01/29 - Heather Houser, English, The University of Texas at Austin, "A Slant on the Aerial through Eco-Media"

02/5 - Ryan Nelson, Philosophy, University of Utah, "A Critique of Neurodiversity"

03/19 - Angela Smith, English and Gender Studies, University of Utah, "Acting Up: Down Syndrome and the Limits of Disabilty Performance"

04/2 - Maya Kobe-Rundio, Communication, University of Utah, "In Our Element: Outdoor Recreation as a Tool for Female Empowerment and Community Builiding"

The London Zoo recently named their newest addition, a baby okapi, Meghan in honor of the latest royal couple. The Como Park Zoo in St. Paul invited the public to vote after the birth of a gorilla, now called Nyati by popular consensus. Zoos rely on celebrity animals to attract visitors and use the lure of “zooborns” to disseminate information about endangered species. But does celebrity translate into pedagogy? What does going to the zoo or engaging with prominent zoo residents via social media actually teach us about wild animals or environmental degradation?

These questions have hounded zoos since their inception in the nineteenth century. For scholars, the zoo fails to impart scientific instruction because it substitutes entertainment for education and because its real subject is not nature but empire, but the trouble is more deeply embedded in the zoo’s foundation. This paper explores the first zoo, London’s Zoological Gardens (est. 1826), and the first zoo celebrity, the hippopotamus Obaysch (b. 1849), to interrogate the pedagogical origins of the zoo, the rise of the celebrity animal, and the ways in which the textual circulation of the zoo “star” (through guidebooks, newspapers, sensationalized biographies, and children’s books) worked both in tandem and in tension with the physical bodies of caged beasts to define the “animal.”

In 1788 Dr. Matthew Guthrie, a Scottish doctor in Russian service, wrote with some concern that while several physicians “of late years pointed out the influence of hot climates on the human body, and its diseases; but few seem to have investigated the effects of cold.” Based on his career in Russia, he suggested that the country provided ample grounds for study, with “the severity of the climate, and the dirty unwholesome mode of living of the common people of this empire, want of proper ventilation, &c.” Fears of Russia’s environment, its food, and the lifestyles of its diverse population were not only raised by physicians like Guthrie but also appear in the correspondence and publication of merchants, diplomats, and visitors to the empire.

In the eighteenth century, Guthrie and his colleagues created a typology of the people of the Russian Empire to both serve the interests of the Russian state and advance the march of science in the Enlightenment. European and Asian scholars traveled through Russia during this period of ferment in biology and ethnography, describing the people, landscape, and customs of the empire, but the differences they catalogued were inscribed ultimately on the bodies of Russian subjects.  This talk will analyze the origins of imperial typology and consider its dissemination across Europe through formal and informal networks, and consider the ways in which this classification schema guided Russia’s colonial project into the modern era.

Spirits are disruptive forces that re-enter time and space to complicate narratives and offer visions of alternative futures. While Mormonism has a long history of individuals interacting with deceased ancestors on the other side of the veil, LDS leadership enforces a line between acceptable spirit communication and spectral encounters that lead to Apostasy. Fundamentalist groups and individuals seeking spiritual authority outside of traditional LDS channels are usually marked as the latter. This paper analyzes one fundamentalist groups’ interactions with the deceased as a source of authority and places them within the broader framework of Mormon succession narratives. In doing so, this research articulates a method of deriving Priesthood authority that, while often deemed unconventional, is nevertheless very Mormon.

In Bram Stoker’s famous novel Dracula, the character Jonathan Harker finds Dracula’s massive library and observes Dracula, withdrawn from view, reading attentively, alone at night: “I found the Count lying on the sofa, reading, of all things in the world, an English Bradshaw’s Guide” (29).

In this talk, I discuss acts of reading in Dracula, and offer “vampiric reading” as a particular aesthetic model or style of reading. “Vampiric reading” denotes one’s love of reading texts, a “love” that then elicits others to indulge in more and shared reading – much like the actual vampirism in the novel, in its literal sense of the vampire’s blood-sucking and blood transfusion between characters; as well as in the text’s erotic intensity, increased and circulated via the vampiric transactions. While characters in Dracula write and share their texts within their community, they – including Dracula himself – are all obsessive readers.

Indeed, these characters’ readerly activities model our own ways of reading texts. Novels can mirror our mental activities in transforming texts into the shapes of our own desires. Like the characters, we, too, tarnish the surfaces of texts in our passionate reading of them, using those texts to reflect our own secret desires and dreams.